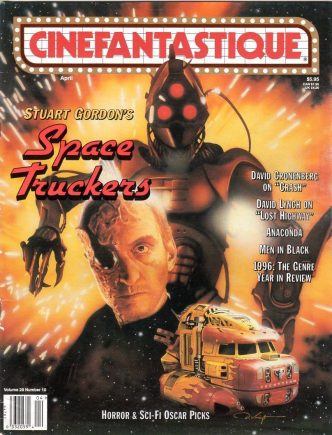 Is was that June 1995 issue of Cinefantastique when I learned director Stuart Gordon was venturing into what looked like some whacked out science fiction piece called, Space Truckers. Naturally I assumed it was a comedy, but the storyboards depicted something also very Heavy Metal-ish. Two years went by and one night in April 1997 while watching HBO I saw a commercial for it. Is that the movie I read about in Cinefantastique? I broke out the issue, had a look, and it appeared to be the same. I watched it but wasn’t overly impressed, and again soon forgot about it. But this was one of a small number of movies I’ve seen over the decades I wasn’t impressed by that for some reason out of the random blue months to years later will come back to me, and I’ll suddenly want to see it again. Luckily this was around the time the DVD was coming out in 1999 (maybe that’s what triggered the memories), and I bought it, and I watched it again, and suddenly I loved it!

As I was writing this review I couldn’t remember what month the June issue of Cinefantastique came out. I had pulled it out of storage days before and it was sitting on my desk in the other room, but due to sheer laziness I decided to just google it, but when I punched in ‘Cinefantastique, Space Truckers,’ I was surprised to see the April 1997 issue pop up instead. Until that moment I had no idea the magazine had done a full blown article on it! 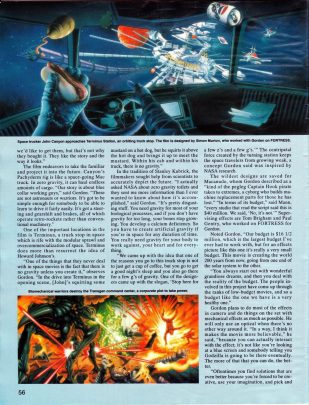 It’s pretty easy to surmise what a movie titled, Space Truckers, is about, and it is exactly what you think it it’s about —truckers in outer space. And your three heroes are as follows: seasoned trucker John Canyon (the late Dennis Hopper), young upstart Mike Pucci (Stephen Dorff) and the object of both of their affections, waitress Cindy (Debi Mazar). It appears in the far flung future you need a “ticket” to get to Earth, and Cindy, who’s been working at the Inter Pork Corporation’s truck stop known as The Hub for longer than she cares to remember has been dying to get back to Earth for a long time to see her mother (cameo by Barbara Crampton in the movie’s final moments). She and Canyon are in and out of some kind of “relationship,” and I only say that because he’s always off somewhere trucking. He wants to marry her, and she’ll agree to that, if he can do what he says and get her to Earth, for a trucker that’s easier, all he has to do is find a shipment heading there and by God he does! Not something on the up and up mind you, but he doesn’t ask questions, and as far as he’s been told, he’s hauling a consignment of “sex dolls.” Even he doesn’t believe that, but who cares. Pucci tags along because Canyon had a “business fall out” with shady Inter Pork company head, Kellor (George Wendt), that resulted in a brawl in the diner, a gun being drawn, and Kellor’s death from being sucked out into space. Pucci decided to act and help Canyon in the brawl, which means now he’s as wanted as Canyon, so tag along, or give up and spend a lengthy sentence in a jail cell somewhere?

There’s a section of space known as the Scum Cluster you don’t go, because it’s full of abandoned ships that have collided with asteroid s and where pirates roam, the most notorious being Captain Macanudo (Charles Dance). His story begins in the prologue,  he was once a scientist who developed this new type of “war machine,” a humanoid robot with a particle weapon for a head. In this reality, even in the far flung future particle weapons are still in their infancy and Nabel (pre-Macanudo) has created the first one. He’s got 5000 of them in storage, and this test the prologue consists of, where this “weapon” has annihilated everyone it was put up against, is turned on Nabel by this Commander E.J. Skaggs (Shane Rimmer); he plans to takeover Earth with them.  Now you would think if Nabel was really smart he would have programmed in a “safety switch” for himself that would shut the robot down if it was ordered to kill him, but, no, Skaggs orders it to blast Nabel into dust, and we assume that’s what happened, that is until Captain Macanudo nabs Canyon’s “truck” and we see it’s the same man, well, pretty much the same man. At one point he’ll tell them he managed to survive that betrayal by Skaggs, but it seriously fucked him up. His face is only half there, and he’s pretty much a cyborg now having put himself together with what he had on hand in his lab.

As a pirate he’s become a rapist and a murderer, and once he learns those sex dolls Canyon is hauling are really those 5000 robots he had in storage, he wants to get even with Skaggs. Macanudo is the primary antagonist for the middle part of the movie, but after one of his own robots finally kills him, they’re the bad guys right on till the end. 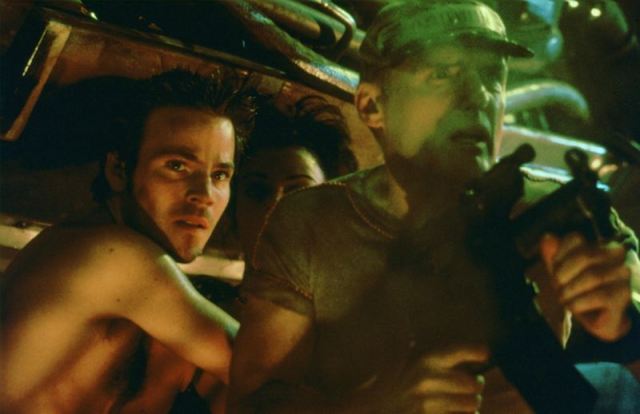 What I’ve come to love about this movie happened when I re-watched it after I got the ’99 DVD. As I watched I kept thinking wouldn’t have been great if me and my brother were kids right now watching this, or if this movie was around when we were kids. There were many monster and science fiction movies we saw in childhood that made an impression, so much so that after the movie was over we’d go out and play the movie, or try and make a facsimile of something from the movie (i.e. a laser rifle from the movie Journey To The Seventh Planet). Space Truckers always reminds me of that, and every time I watch it I just know there are kids somewhere out there in the world discovering it and playing it! Too bad we never got a Space Truckers franchise, but Stuart Gordon was never big on sequelizing his movies, he left that to Brian Yuzna who did that with his two Re-Animator follow-ups.

To date that out-of-print DVD is the only release Space Truckers got in the U.S., so if you as big of a fan as I am of it, you’ll have to go overseas for now and secure Second Sight’s new blu-ray coming out on May 14th. You can buy it here on Amazon UK, but it’s not region free, which means you’ll need a region free player, and you know where you can get one of those, right here at 220-electronics. 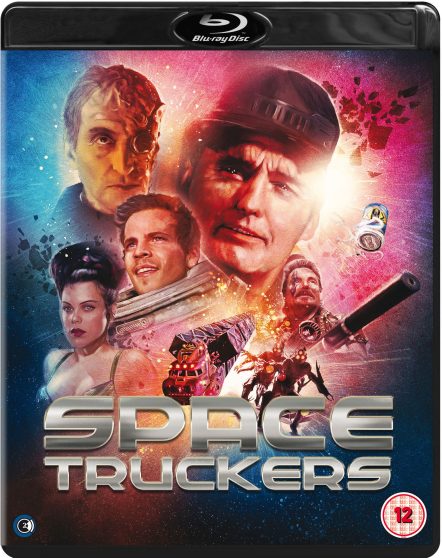 If you’re one of the lucky ones who to still own the U.S. DVD, keep it, for there are crucial extras not ported over to Second Sight’s blu-ray like the ‘Making Of,’ which has a lot of on- set behind-the-scenes video, Production Storyboards, and Gordon’s commentary.

This site uses Akismet to reduce spam. Learn how your comment data is processed.