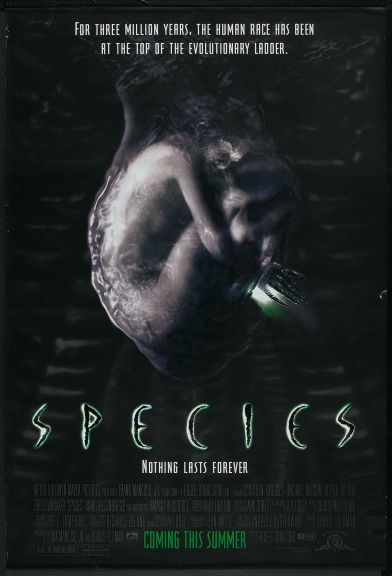 I saw Species in the theater in the summer of 1995, and liked it, despite having read the novelization a couple of months before, and we all know novelizations tend to always be better because there’s ample time to go into more detail. This was back when I still loved reading movie novelizations. I was momentarily tempted, however, to read the one on Alien: Covenant. I liked Species enough that I bought the VHS when it came out, but I can’t remember if I ever bought the DVD. I seem to think I did, but got rid of it after losing interest in the movie.

If Alien (1979) gave us Sigourney Weaver, Species gave us Natasha Henstridge! Bring up her name and this movie is the first film that comes to mind, then comes Ghosts Of Mars (1998), Adrenalin: Fear The Rush (1996) and that secret agent series she starred in, She Spies (2002-2004). I also tend to remember that Outer Limits episode from 1997, “Bits Of Love,” and the above average actioner, A Better Way To Die (2000).

Unbeknownst to the public scientists in the SETI program actually received a response to a message they sent out. Two responses actually, one was on how to create an endless and clean fuel supply and the second was alien DNA with “friendly instructions” on how to combine it with our own. Xavier Fitch (Ben Kingsley) is in charge of the latter and he chose to create a human female/alien hybrid thinking it would be more “docile and controllable.” I’m guessing Fitch might be a Republican? Well, he raised it until it was twelve and then for reasons the movie never goes into he decided to pull the plug and terminate the experiment. This is where the movie starts with researchers attempting to gas to death what appears to be a human looking girl in a chamber. As expected she breaks out and flees the facility.

Fitch assembles a team to hunt her down and kill her, and we know he wants her dead because of the presence of Preston Lennox (Michael Madsen). He never states it outright but his explanation of what he does is pretty much government assassination. The other non-scientist on the team is Dan Smithson (Forest Whitaker) who’s an empath. The two scientists accompanying them are Laura Baker (Marg Helgenberger) and Stephen Arden (Alfred Molina). Basically a solid cast with Madsen finally playing the hero for once, and with Helgenberger as his love interest. Banter/flirting between the two is fun to watch. I also liked Kingsley in this even though his performance comes off as cold and aloof at times. The only time he shows emotion is in the beginning while he’s watching the alien-human hybrid code named, Sil (Michelle Williams as 12-year-old Sil), being gassed, and when an experiment to grow the alien DNA purely to see what it looks like without a “human mask” goes horribly wrong and he won’t let Press and Laura out of the chamber the growing alien is in with them. There are other moments when his character comes off as “traumatized” from all the death they’ve been witnessing as they track her, which is understandable. At least that was my interpretation.

The novelization (back & front cover) and the official movie magazine. 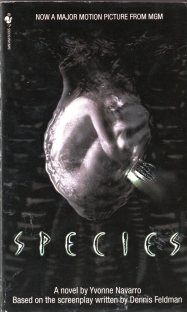 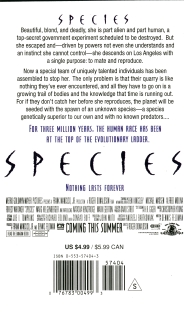 Sil eventually hits a cocoon stage and emerges as nineteen-year-old Natasha Henstridge. Yeah, Henstridge states in her commentary she was actually eighteen but turned nineteen while filming the movie. Wow, she doesn’t look like a teen, if I had to put an age to her in this movie, she looks more like mid-twenties or something.

This alien can shed her human mask and revert to her alien form at will, which was designed by H.R. Giger and realized as an extraordinary animatronic character by FX artist Steve Johnson and his crew! She can also heal herself at will as is evidenced by a scene where she’s struck by a car and broke the back of her shoulder. While in the E.R. she heals herself right in front of the doctor. She can also read lips from a distance, has strength and agility far superior to that of a human (she bashes her way through a wall in a hotel and later on through an actual metal door), and has two biological weapons she puts to good use—a tongue and tentacles that can shoot from her nipples. It seems every Giger creation has to have some kind of weaponized tongue. Sil’s isn’t as elaborate as the one the xenomorph had in Alien (1979), but it does about the same kind of damage. 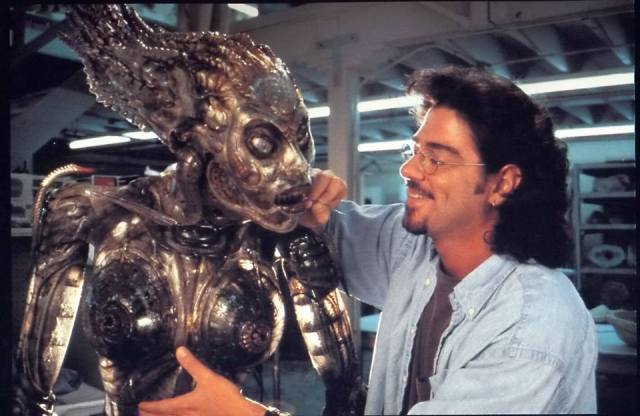 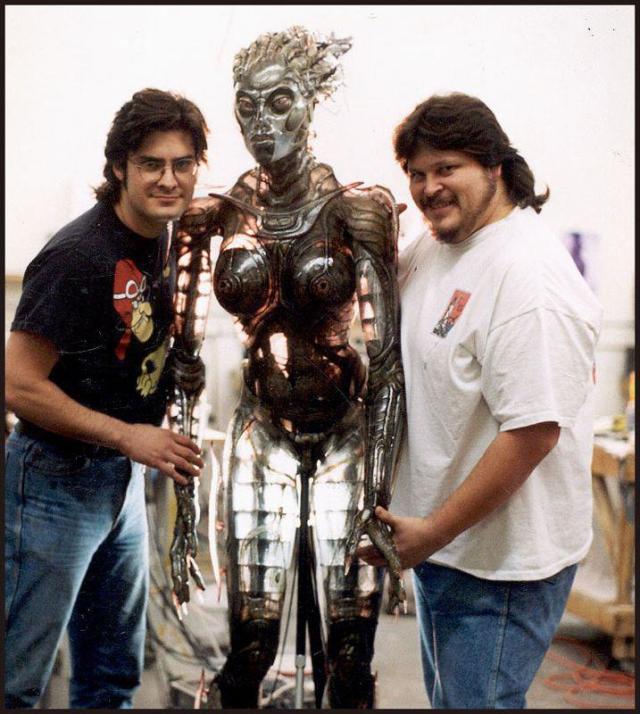 There is a degree of CGI present, and at the time I remember thinking it wasn’t bad, but seeing it now in 2017 it looks almost primitive. Thankfully director Roger Donaldson was so enamored with Johnson and Giger’s creation he featured the practical effect as much as he dared, which still holds up to this day. The CGI tentacles in the beginning when young Sil goes into her cocoon stage and the full CGI Sil and her mutated offspring in the final moments of the film, however, are a bit hard to watch. Check out the behind the scenes extras, especially the ones on the FX, and the photos in the official movie magazine (if you own it), to see the kind of detail on the animatronic you just don’t get in the movie. 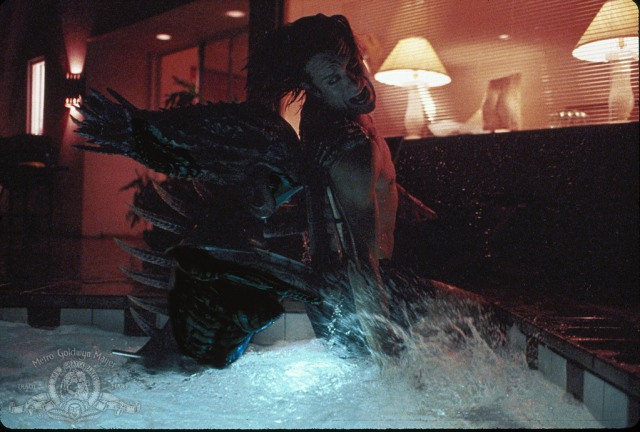 Sil’s reason for causing all this bloody havoc is simple—she wants to mate! And the two guys she gets close enough to for this have some kind of deficiency that would make them bad mates. She can detect “flaws,” and the guy (Anthony Guidera) that gets her tongue shooting out the back of his head during a kiss was diabetic. The second guy (Whip Hubely) seemed to be perfect, the only deficiency he had was basic “apprehension” I’d say. Press and Laura just happened to track her down at his place and showed up just as they were getting ready to have sex in his hot tub. For reasons only known to Sil, she randomly kills him when he wants to go see who’s knocking at the door.

She eventually targets Press as her next possible mate, but at the last minute ends up mating with Arden in his hotel room, to which we learn getting one of these alien/human hybrid’s pregnant will result in actual birth hours later. She kills Arden, though, once he realizes he just screwed the very creature they’ve been tracking.

The final confrontation between the rest of the team and Sil happens in the sewer system of Los Angeles, and then in a cave system lower down where Sil gives birth to what appears to be a human baby boy, but it soon grows up and mutates into something a lot less attractive than she in her alien form. By now Sil has killed Fitch, leaving Press, Laura and Dan to take her out. Press delivers the death blow while it’s attempting to pull Dan down into the fiery tar pits it’s about to burn to death using a grenade launcher to totally blow her alien head clean off. But, wait, there’s one last stinger of a scene that has to set up a sequel. I forgot to mention Dan took out the rampaging offspring earlier with a flame thrower, but a piece of Sil’s tit tentacle Press cut off was left behind and a rat eats it. Somehow devouring this alien biology will morph you, or in this case, the rat, into some kind of alien hybrid. This angle wasn’t even used in the Species II sequel that followed in 1998. None of those sequels were on par with the first one. At least the second was made for the theaters; Species III and Species IV:The Awakening were direct-to-DVD flicks. Natasha Henstridge made a brief cameo in III. I never saw the fourth. The less said about those sequels the better.

MGM has released and re-released Species on DVD and blu over the years in various stand alone discs and sets, but come July 11 Shout! Factory’s genre label, Scream Factory, releases it in a new 4K remaster 2-disc special edition that you can buy here on Amazon or on Shout’s own website! 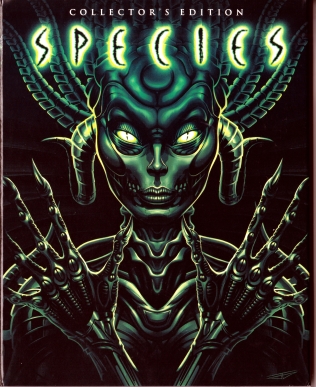 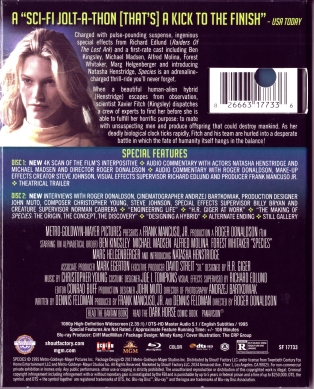 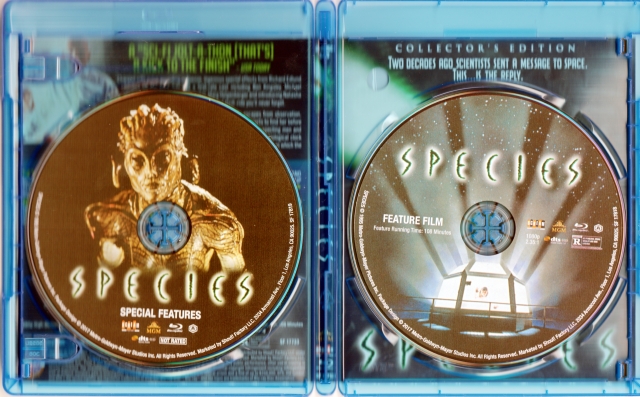 I wonder how close we are to MGM wanting to remake this?

Movie collector and horror writer.
View all posts by Shawn Francis →
Gallery | This entry was posted in Species (1995) Blu-ray. Bookmark the permalink.

This site uses Akismet to reduce spam. Learn how your comment data is processed.